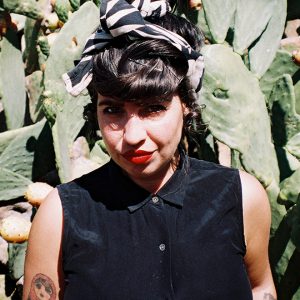 Electrifying band in tow (incidentally this band is smokin’ hot), Emilee South has been exploding with a distorted and raucous live show. Uniquely combining elements of psycho-surf and rock ‘n’ roll and Emilee’s fierce guitar playing, she’s been described as “Piaf meets Elvis”.

“It’s hard for me to describe the style or genre of my music. I tried conscientiously write songs that were just songs – the classic verse, chorus, verse, chorus – easily digestible with a classic story”.  Emilee South

In 2017, Emilee’s EP ‘Motel’ was released with a bang and launched to a sell out crowd at the Gasometer. She has played many gigs and also supported the Tesky Brothers, Mojo Juju and others. Emilee and her band have also played Americana Festival in the US (one of the biggest festivals meets conferences in the state). Their performance this year at BIGSOUND in Brisbane was met with critical reviews and was described as – ‘Raw, and powerful, showcasing her Boss voice and slick guitar skills matched with a swagger that points to a little danger’.

As a songwriter, Emilee’s new tunes are so cohesive and more rock ‘n’ roll as a result of having undertaken songwriting with the band. This cohesion translates to the stage as the dynamics of energy, mayhem and fun as punters respond by tearing up the dance floor!

Bring ya Dancin’ Shoes and the hip-shakin’ good times!